As the year draws to a close, we asked some of our team members for their highlights of life at the tunnel in 2016. Here's what they had to say:

Sarah: Customer Service – iFLY Basingstoke
“I had a little boy on his 10th birthday, he was so excited, when he went in the tunnel he couldn’t bear the noise and he looked so sad. So, when he came downstairs. I took him brush boarding and he left with a high smile on his face!! I thought to myself we can’t have anyone leaving here sad, especially on their birthday!!”

“I took a little girl who couldn’t have been older than about 6, into the tunnel. She seemed quite scared at first but when she came out she ran over and gave me a hug, to which her mum said she thinks I’m a super hero. Kind of made my day.” 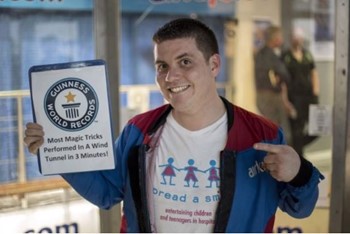 “A return flyer, Thomas, who is a blind young man has been flying with us for a while now. He has shown a massive understanding of “feeling” the wind despite not being able to see where he is!! It’s amazing and an inspiration to see him currently learning to sit fly. He does it better than most people who can see.”

“I was completely inspired by Martin Rees, a magician who came to us with the idea of creating a Guinness world record for the number of magic tricks done inside a wind tunnel, while at the same time raising money for a wonderful charity called Spread a Smile, which is dedicated to putting smiles on the faces of children who are seriously ill in hospital. We trained Martin over many months and got him to the level where he could complete the world record in May. It was a great achievement for Martin and I was thrilled to have been involved”

“I’m always super excited when I get to run FITP's (Flight Instructor Training Programs).  It’s great to see fresh and excited faces entering the world of instructing. The one in autumn at iFLY Basingstoke was particularly enjoyable, with everyone doing well and loving life”.

“My highlight of the year was to help teach Gary Connery to fly head down. For those who don’t know, Gary was the guy who played the Queen parachuting in to the start of the Olympic Games in London and is a bit of a legend in the world of skydiving. It was fantastic to watch him progress thought out the year, and I'm really pleased to have been able to help him rock it out!”

“Highlight of the year is an easy one for me as it took place just a couple of weeks ago, when one of our sister tunnels, iFLY Portland, ran another of their famous all abilities events. The attendees included flyers who had either lost limbs in accidents, or those like brave little Tessa Brown, who have been without them since birth. These people refuse to let their misfortune get in the way of them achieving great things and it is so heartwarming to see them in the wind tunnel, flying with smiles on their faces".