Last year, my mother-in-law had expressed a desire on how she wanted to celebrate her 90th birthday on 2nd of April this year. "I don't want to spend my birthday with old people," she said and had mentioned to relatives how she always fancied doing a skydive. We looked into whether it would be feasible, knowing that medical approval would be required (having gone through the process myself, when I did a skydive in 2014) and judged it to be rather too risky for her.

We realised then that a tandem parachute jump wouldn't be a very clever idea but thought that the Indoor Skydiving facility at iFLY Indoor Skydiving in Milton Keynes might be a perfect substitute, after all, she would only have to say Stop! if it all got too much, something she wouldn't be able to do mid-jump. It was duly booked for her birthday, with the staff at iFLY Indoor Skydiving being aware of the significance of the day. On arrival, she was offered a 'super-hero' flying suit, rather than the standard suit (although we aren't sure she recognised the status!). She was amongst a group of people, all very much younger, and some clearly exhibiting nerves, which she had no apparent signs of. Keith and I climbed the tower with her to the flying chamber where she was in for a surprise, as her nephew and his wife had driven down from Northumberland especially for the event.
With a last check of the helmet and goggles, Keith flicked the thumbs up, to which she responded with her thumbs-up, and I captured the shot.
She did really well, flying better than several of the other participants, and she loved every minute.

Although I work professionally as a photographer, this is the first time I have entered the Portrait of Britain so was delighted when at the end of May I was informed that I had been shortlisted into the final 200, which also meant the photograph would be included in the accompanying Portrait of Britain Vol.2 book to be published by Hoxton Mini Press.

Please click here to see my shortlisted photo. The story was picked up by local press Saffron Walden Report, read the article here.

Please check out my work on my Instagram @celiabartlett_photo 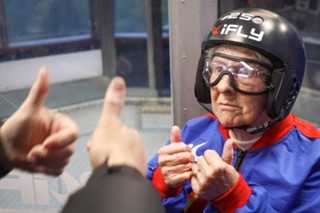